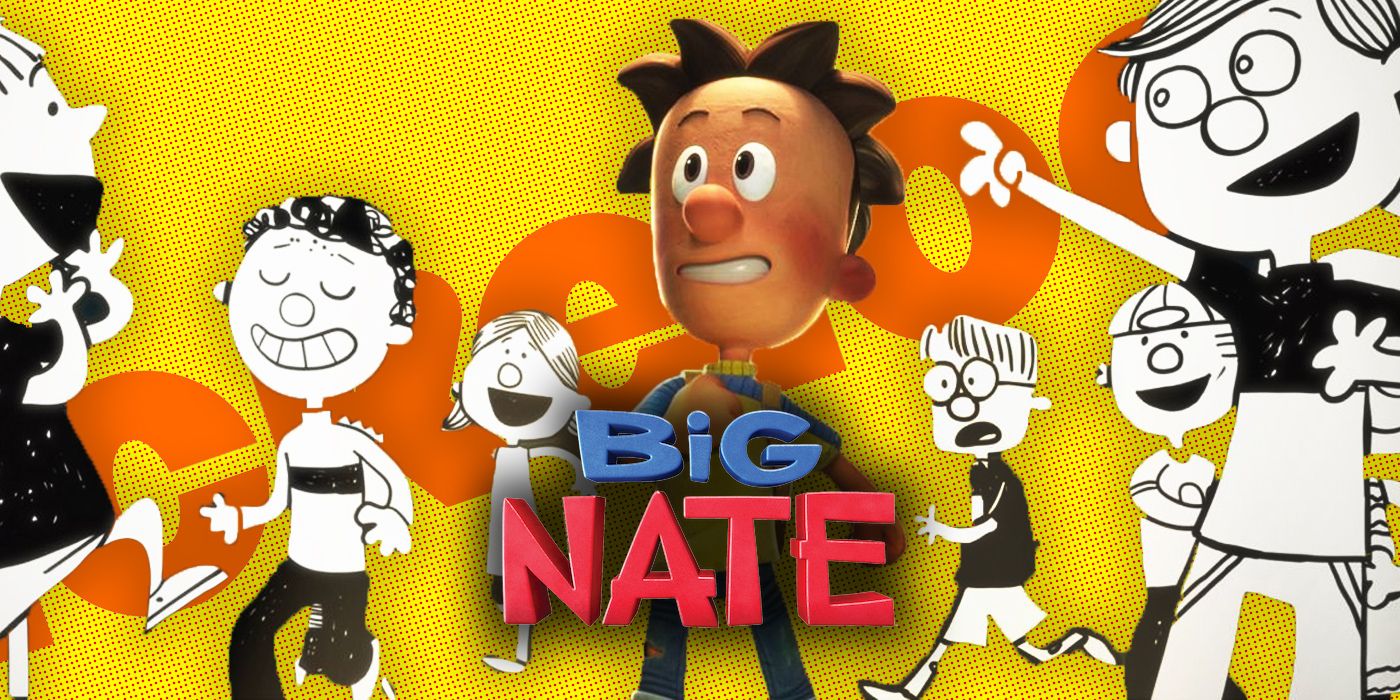 The next Paramount+ series Fat Nate (adapted from the long-running comic and book franchise by the author Lincoln Peirce) follows the antics and misadventures of titular protagonist Nate Wright (voiced by Ben Giroux), a mischievous and creative sixth-grader who prefers hanging out with his friends, drawing cartoons, and playing the drums instead of going to school (who can’t understand, right?). He is also a notorious prankster who often finds himself in the crosshairs of his social studies teacher, Mrs. Godfrey (Caroline Hennessy) for various shenanigans, and usually spends more than a little time in detention as a result. The show, which is produced by mitch watson and John Cohenalso features the voices of Dove Cameron, Rob Delaney, Arnie Pantoja, Charlie Schlatter, Kevin Michael Richardson, Daniel MK Cohenand Brice Charlesand includes a special guest appearance from Jack Black. Collider exclusively launches the Fat Nate theme song ahead of the show’s February 17 premiere on Paramount+, and you can check it out in the player above.

COLLIDER VIDEO OF THE DAY

Earlier this week, we also had the chance to sit down briefly with Watson and Cohen to discuss this adaptation’s long road to release, what they decided to take from the original Fat Nate stories for the TV series, and what kind of sound they were always going for with the theme song, as well as if there were other versions that existed before they settled on the finished product.

Collider: When it comes to this show and adapting these beloved books, it’s been a long road so far. How did you both become involved in filming Fat Nate in a show, and when did the pieces fall into place for that to finally happen?

JOHN COHEN: Well, I’ll jump in. I’ve been a big fan of Lincoln Peirce’s comics and books for years and contacted him a while ago. We always knew from the start that Fat Nate should be an animated series. It was very important. We also wanted to make sure we found the right house and the right partners to do it.

What we found with some of the people we spoke to was that they could only envision it as live action. They were very excited about it, but they said, “Well, it should be like Diary of a Wimpy Kid“, which these films were made in live-action. But we strongly felt that they were cartoon characters, like The simpsons Where Peanuts. And our characters don’t age. Nate is still in sixth grade and they have drawings in a cartoon physique. That’s how when we got together with the team at Nickelodeon, Ramsey Naito, Nathan Schram, Claudia Spinelli and all the amazing people out there who introduced us to Mitch, we knew we had found the perfect collaborators and the good house to do this.

MITCH WATSON: And I got involved when, as John said, Ramsey Naito, who runs Nickelodeon, I’ve known her for many, many years. She reached out to me because she thought Nate’s character reminded her of me. So I said, “Okay.” She introduced me to John, and John and I hit it off. I think they then introduced me to Lincoln and heard what Lincoln’s intentions were and everything to do with it.

I think the big linchpin was the problem people had in the past with adapting this character was that a lot of people read him on the surface because Nate is a jerk. Who wants to watch a show about a jerk? And I didn’t read it that way. I basically read him as a somewhat insecure kid who dreams of being something better than him, and his way of doing that is basically being the class clown. He pranks and makes his friends laugh and does things and tries to achieve that level of awesomeness that’s a fantasy in his head of where he needs to be. When we meet him in the pilot and then in the rest of the series, he’s not there yet, but he’s moving in that direction. So that’s really his arc for the series. Maybe it’s because I identified with the character, and I was a bit like that in college that it made perfect sense to me. So when I chatted with Lincoln and John, and they heard my point, we just clicked.

Then it really became, how do you show that to an audience? In the pilot, this was achieved by creating the character of Bentley Carter, who is truly a horrible person. So when you really see someone who’s really awful at Nate, you realize, “Oh, Nate’s not that bad. Nate’s not even close to being that crazy.” So that allowed us to show the more vulnerable sides of Nate. Then we created the character of Brad Gunter, who is played by Jack Black, who is Nate’s weird spirit. Nate is sitting on the toilet, and he’s talking to what may or may not be a fantasy about who he wants to be and how he didn’t think it was going to be that hard, and his mind basically tells him not to keep his head down and go ahead. I think any kid in that age bracket, or even above, even adults, you want to root for that kid. You want to put down roots, regardless of whether he’s a troublemaker. You want to nurture a kid who dreams of being something better than they are, and that was the key, that was the engine that we found that helped us make the show.

How many episodes are taken from existing stories? Or did you want to use some of those familiar stories as a springboard to maybe introduce some new stuff that fans don’t know about?

WATSON: With the exception of one episode that was a bit late, we didn’t really pull any of the episodes from the books. My goal in adapting the IP is not so much to make an exact copy of the books, but to kind of take the tone and the mood and the patina or whatever you want to call it from the books and to translating that into a TV show so when you watch the show it might be different stories, but it still feels like the books. It’s a tricky balancing act, but that’s the point. So the way we do that is we haven’t really changed the characters that much. We’ve added some, but their general personalities are the same as in the books. By doing that, we could just stick them into other stories that are much, much bigger.

Lincoln has been a total partner in this thing since day one, and he once told me that books… you don’t see the world in books, you see little pictures. So he gave us this little template, it was our job to fill it all in. It was our job to color it in between the lines and stuff like that, which is to say, that’s a pretty good way to look at it. Because it gave us the freedom to create our own stories, while maintaining the integrity of his books.

COHEN: We really wanted to stay very true to his creation, and these characters that live on for 31 years from the comics have been defined and fleshed out so well that we’ve looked at all of Lincoln’s work and spent hours and hours l study as the basis for everything built on it for the series. What’s exciting is that Lincoln himself was involved in the creation of all the episodes. He wrote on every episode. So having him as a collaborator on the show is something that we were hoping to have, and we’re so lucky and grateful that we did.

WATSON: From the start, that was our intention. We didn’t want it to be one of those things where you’re like, ‘Oh yeah, you created the books, now go away. We don’t want to deal with you anymore.’ Our attitude was, “We want you to be as involved as possible. Lincoln came to our writing rooms. Our Art Director, David Skelly, went to the ends of the earth to make sure that even though this was a CG show, it was representative of what Lincoln had done. He was therefore as much a part of the show as all the other members of the team.

Since we’re releasing the theme song, I wanted to ask you some specific questions about it. Were there ever other versions of the song that were considered or was it always about hearing this one and saying “No, that’s the one”?

WATSON: There were three different versions of the theme song that were written. One was completely different. Whoever did it, I wrote with our composer, Fred Wiedmann. And then there was a different version that I wrote with another composer who was a bit more rap or hip hop. It wasn’t quite right. When Freddy and I sat down to talk about the music for the show, I said, “It must have a heavy garage band feel.” I mean, I used comps like MC5 or those old punk bands. So skater punk is a good composition. Green day, of course. But all of that was the pattern, and that’s pretty much reflected in the theme song. If you listen to the music of the show itself, it’s more what Ennio Morricone meets, those two sorts of things. Because I wanted the music for the show to have a more heroic vibe, but still mean and dirty. The theme song itself is heavily influenced by MC5, Green Day, The Clash, early Iggy Pop, that sort of thing.

COHEN: I also think with Jack Black’s involvement on our show, there’s a bit of Jack Black and Tenacious D. It’s also a song that will stick in my head for days and days at a time , and I love. That, I think, is always a good sign of a great theme song. It’s one that’s memorable and I find myself humming and singing it all the time.

WATSON: We wrote a lot of original songs – someone showed me the count, 22 original songs just for the first season. So there are a lot of songs. There’s also a lot of music in the show itself from the 80s and 90s, needle drops specifically, we chose to give that weird nostalgia, but to add to the vibe. And we were lucky to get some pretty well-known songs, which I think people will be shocked when they actually hear them. There’s one in the pilot, of course. But yeah, the music was a big part of the show.

Carly Lane is an Atlanta-based writer who considers herself a lifelong Star Wars fan, rookie Trekker, hardcore romance reader, budding horror lover, and Wynonna Earp live tweeter. She is a former editor of SYFY FANGRRLS and has also written for Nerdist, Teen Vogue, Den of Geek, Motherboard, The Toast and elsewhere on the internet.

Sign up to the Collider newsletter for exclusive news, features, streaming recommendations and more

This Valentine’s Day Tell Him With Genuine Software: Get Genuine Windows 10 and Microsoft Office, Valid for Life, at a Great Price