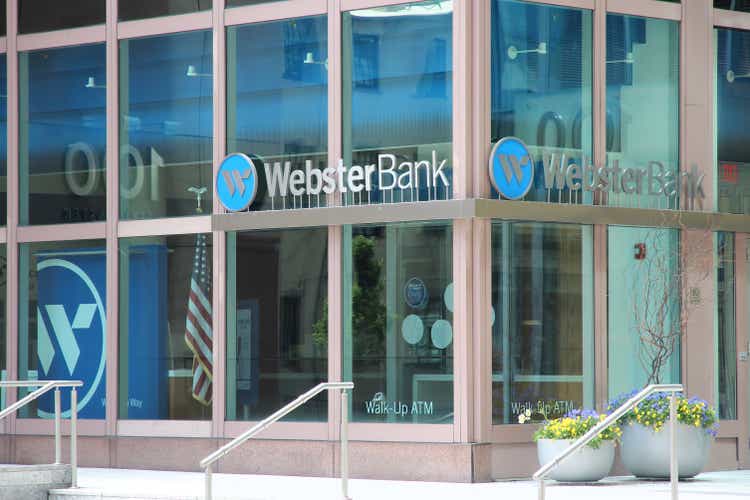 Even though the street still has its issues with banks doing big mergers and acquisitions, sentiment has definitely improved around Webster Financial (WBS), with stocks outperforming their peers (and the S&P 500) by a healthy margin since my last update. I’d like to think the street is realizing the long-term strategic and financial benefits of the deal, but I suspect it has more to do with Webster having above-average sensitivity to assets entering a down cycle. tightening.

Now that the deal with Sterling is done, I think there are a lot of positives for the years to come. I like the increased focus on commercial lending, and I think there are some good specialized niches that Webster can tap into in this up cycle. I also like this above-average rate sensitivity, as well as the prospect of post-transaction cost synergies, even if it will take two or three years to fully materialize. With double-digit annualized return potential from here, I think Webster is still a stock to consider as it becomes one of the biggest players in its footprint.

Improve the basic results to close the year

Webster had a strong fourth quarter on a core earnings basis, with costs related to the sterling deal excluded from the numbers (fairly common practice). Webster has also shown encouraging progress with loan growth, and the bank remains very asset sensitive.

Revenue was up about 8% year-over-year and 1% quarter-over-quarter, which is 3% above the street average. Net interest income was up more than 4% YoY and down more than 1% QoQ, just below expectations; net interest margin decreased 7 bps QoQ, missing 2 bps. Commission revenue increased 17% year-on-year and almost 8% quarter-on-quarter, beating expectations of 13%.

Core spending was down 1% yoy and 2% qoq, coming in slightly better than expected. Pre-provision earnings saw a significant year-over-year jump (up 21%) on positive operating leverage and increased more than 1% quarter-on-quarter, adding around $0.12/ action against Street’s expectations. Provisions were also lower than expected, further boosting earnings.

Improving trends for the next cycle

While most banks saw lending growth in the fourth quarter, Webster did slightly better than average, helped in part by its leverage in more specialized niches like leveraged lending and ABL.

Overall, core lending was up about 4% qoq, with C&I lending approaching 8%. In this C&I figure, leveraged loans were up almost 30%, while asset-backed loans were up almost 9%. Total sponsor and specialty loans (including leveraged loans) increased more than 9% sequentially. I would also note that creations were up sharply, rising 30% QoQ to $2.6B (from an end of period balance of $22.3B)

Webster didn’t report the same significant decline in non-performing loans (NPLs were actually up about 8% year-on-year), but criticized loans were down almost 25% and the credit situation here isn’t much worse. is not of concern. Moreover, with a reserve of 1.37% of loans (ex-PPP), there could be room for more reserve releases.

Management believes it can generate loan growth of 8% to 10% on a sustained basis heading into the next cycle. It’s not a conservative number, but I think it’s doable, especially given the company’s focus on more specialized niche markets and the fact that other banks have bailed out areas such as leveraged loans.

Asset sensitivity is another advantage in favor of Webster. With over 60% floating loans and a strong core deposit base, aided by large HSA banking activity, Webster should have above-average rate sensitivity and manageable deposit beta risk.

It almost goes without saying that executing the deal with Sterling is a critical task for management over the next two to three years. I continue to like the opportunities the deal provides for Webster to expand its specialty lending operations (including its asset-backed lending, equipment financing, and leveraged lending) in the New York area, and the additional exposure to small commercial lenders that Sterling brings.

I am also optimistic about the scale provided by the agreement. Webster will be smaller than M&T Bank (MTB), Nationals (CFG), and Signature (SBNY) in its primary NY-CT-MA-RI operating region, but it’s still enough scale to count and to help drive growth at the expense of smaller players who lack the resources to truly compete in attractive commercial loan categories.

Including Sterling, I expect Webster to deliver mid-teens earnings growth over the next decade, and earnings per share growth should be significantly higher as the bank seeks to incur significant capital to buy back shares; the bank is overcapitalized (a CET 1 ratio of 11.7%, and even taking into account the financing needs of the operation and the growth of loans to come), I believe that the company can execute its objective of paying back 75% of earnings to shareholders (30% for dividends and 45% for buybacks). On an organic basis, I believe mid-single-digit growth in core earnings is possible as the bank benefits from a tightening in business operations.

In all my favorite valuation approaches (long-term discounted basic earnings, ROTCE-P/TBV, P/E), Webster looks undervalued. A 12x earnings multiple of 23 supports a fair value near $71, and I think you could argue for a multiple as high as 13x based on superior growth and return potential . With discounted long-term earnings, Webster appears priced for long-term double-digit annualized total return.

Webster has a lot of what investors should be looking for in banking right now – potential for above-average loan growth, a solid base of core deposits to fund those loans (and resist the flight of deposits from speculative money), asset sensitivity and operating leverage potential. Considering all of this and the review, I think it’s a name worth taking a closer look at.